Coasters and conservation at SeaWorld Parks

I’m travelling at 76 miles per hour – and I’m not in a car. I’m out there with the elements, freefalling 206 metres down a vertical drop as the wind whips my cheeks, the rain speckles my face and my screams ricochet off into the air.

Soon I’m twisting, turning and corkscrewing my way round the rest of the track, lost in an adrenaline-fuelled blur as flashes of the park whizz by beneath me. I’m riding Iron Gwazi: a mammoth, wood-and-steel construction that opened at Busch Gardens Tampa Bay in March and claims to be the tallest ‘hybrid coaster’ in North America – and the fastest and steepest of its kind in the world.

Stretching 4,000ft, it’s something of an architectural feat with huge wooden slats supporting a retrofitted steel track. And it lives up to the hype – so much so that I’m soon queueing up to do it all over again. 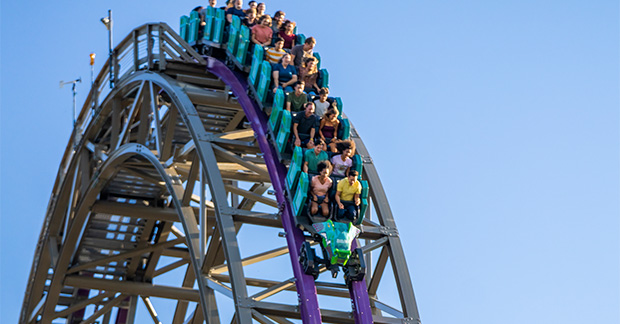 It’s my first time visiting SeaWorld’s parks and I certainly have my fair share of thrills. At Aquatica Orlando, I sample the new Reef Plunge, tumbling down a translucent, fibreglass tube where colourful fish dart around beside me.

Then I find myself taking on Ihu’s Breakaway Falls – a near-vertical drop slide that starts in a plastic capsule before the floor drops away with a bang – and I freefall, terrified. At SeaWorld Orlando I ride the recently opened Icebreaker – an Arctic-themed coaster that has me ascending the track backwards before plunging back down it at a 100-degree angle – and take on Mako, the tallest and fastest rollercoaster in Orlando.

But my highlight has to be Manta, a hanging coaster where the carriage turns 90 degrees so you’re facing the ground, arms and legs outstretched as if you’re flying, manta-ray-style, above the park.

SeaWorld’s parks aren’t only about the rides, of course. At Busch Gardens I embark on the Serengeti Safari, travelling round a section of the park’s 65-acre plot in a bumpy open-air cart to see rhinos, giraffes, ostriches, zebras and antelopes grazing in the grass. At Discovery Cove – a tropical, palm-lined resort where beaches flank a series of manmade lagoons – I try out SeaVenture, descending into a colourful reef with an oxygen helmet on my head as tropical fish dart around me. 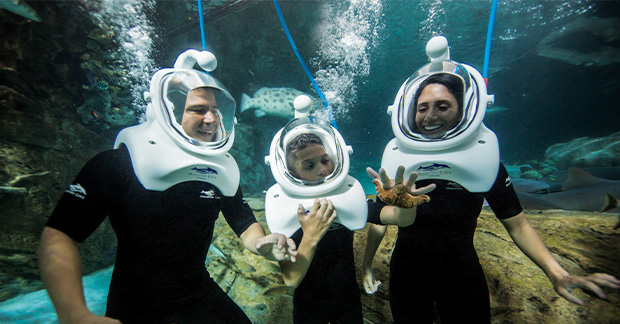 But I’m not only here for the thrills. It’s no secret SeaWorld has come under pressure from animal rights campaigners and travel companies, and it ended its orca-breeding programme in 2016. But I’m intrigued to find out what else is being done to support conservation in the wild, and the animals in its care.

At Busch Gardens, I’m taken around the Animal Care Center to hear more about the vet procedures that happen here, visiting a clinical lab, dental unit and radiology room. It’s an impressive operation, with high-tech pieces of equipment and a shiny-looking treatment room where an armadillo is being put under anaesthetic.

SeaWorld has rescued more than 40,000 animals since opening in 1965

At SeaWorld Orlando, I learn more about the company’s rescue programme – a round-the-clock operation in which rescue teams fly to all corners of the US to treat marine life in need, partnering with government agencies, conservationists and other zoos. Jon Peterson, vice-president of Zoological Operations at SeaWorld, tells me that rehabilitating a dolphin costs an average of $250,000; a manatee can cost significantly more.

Proceeds from ticket sales and in-park purchases go towards funding the programme, and visitors can take the 30-minute Park Extra Rescue Tour (from £18) to learn more about SeaWorld’s conservation efforts for themselves.

“We never say no to an animal in need,” says Peterson, telling me SeaWorld has rescued more than 40,000 animals since opening in 1965 – making it one of the biggest animal rescue organisations on the planet. “Our goal is to return every rescued animal back to its natural environment as quickly as possible,” he says, adding that many can be treated there and then on the scene. 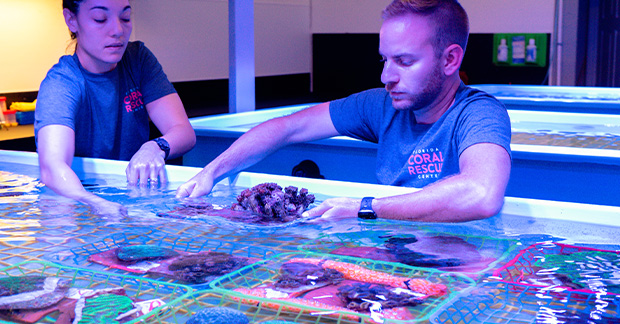 When I visit, Florida is in the midst of a manatee crisis, with seagrass loss, caused by algae blooms blocking sunlight, leading to mass starvation. “More than 1,100 dead manatees were reported by the Florida Fish and Wildlife Commission last year – that’s nearly 20% of the East Coast population,” says Peterson.

I’m led around the manatee rescue facility – a five-acre centre with enough space for 60 manatees across its pools (nearly 50 have already been taken in this year). I’m told it’s the only rehabilitation facility in Florida currently able to take critically ill manatees, and one of only five critical centres in the US; it’s also the biggest of its kind in the country.

We learn about a manatee whose fin has been damaged by a boat, and browse the equipment used to treat them (some of which SeaWorld has pioneered – among them a special milk formula that can be adapted to suit the needs of different calves). I’m told 96% of the manatees treated here have been returned to the wild after rehabilitation.

I also hear about an Eco Club community project involving children from a local school, who’ve been growing hydroponic lettuces for manatee food and producing honey that’s used to help heal their wounds.

The school project is one of several initiatives I learn about. Under the SeaWorld Conservation Fund – a not-for-profit foundation set up in 2003 – I’m told the company has donated more than $19 million, funding 1,391 conservation projects across the world.

Projects have ranged from supporting turtle conservation in Latin America to advancing rope-less fishing to prevent entanglements. Funding comes from various sources, including merchandise sales, roundups at the tills in the parks, donations from partners and contributions from SeaWorld’s corporate entity.

“Our approach to conservation is on several different levels,” says Kelly Flaherty Clark, vice-president of zoological operations at SeaWorld Parks & Entertainment. “We fund government projects, we fund research projects and we partner with organisations that help us to learn more about ocean health.”

I’m told about various programmes, including a partnership with Wilderness Foundation Africa, funded by proceeds from Iron Gwazi merchandise, to support anti-poaching initiatives and education in South Africa; and a partnership with Florida Coral Rescue Center, providing care for rescued corals with the aim of restoring Florida’s reef.

“We also collaborate with behavioural and biological scientists on projects around animal physiology and welfare, and support the government-funded Human and Environmental Risk Assessment (Hera) assessment project, providing research to assess the health of wild dolphins,” she says.

“We’re also accredited by the Association of Zoos and Aquariums [an accreditation about 10% of US zoos lay claim to] and participate in the Species Survival Plan to manage wildlife populations. We hope that by coming here, guests will be educated and inspired by the people and animals they interact with.” There’s certainly something to be said for educating guests at an accredited organisation – and for supporting one of the world’s biggest animal rescue organisations in the process.

While there might still be more work to be done, it’s fair to say the company is taking steps in the right direction to give back to the planet in a way not every zoo can claim to do. And it’s certainly not short on appeal for thrillseekers either – although I might need a bit of a break before taking on Iron Gwazi and the drop slide again. 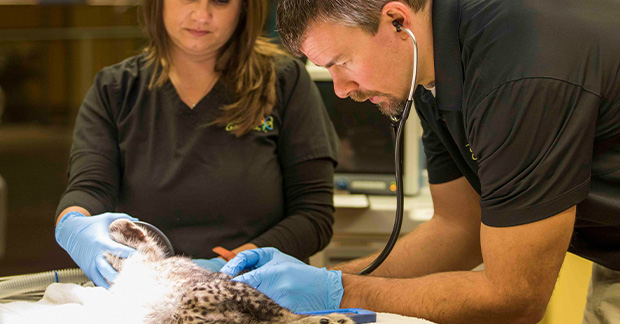 New all-day dining tickets allow guests to have one main meal, one side or dessert, and a regular non-alcoholic drink every 90 minutes at restaurants across the three parks.

Just a 10-minute walk from SeaWorld, this family-friendly, tropical-themed resort is set amid 28 acres with two pools, a pizzeria, outdoor restaurant, fitness centre and mini golf course. Rooms are comfortable and spacious with interconnecting options for families. Guests get a free shuttle bus to SeaWorld, Aquatica and Discovery Cove.
hilton.com

Ocean Florida offers a 14-night holiday for a family of four, including flights departing on October 1, 2023, and accommodation at the DoubleTree by Hilton Orlando at SeaWorld, from £979 per person.

The operator also sells a 3-Visit Ticket + All Day Dine pass, from £149 per person, including single-entry tickets to SeaWorld, Busch Gardens and Aquatica and dining. A Discovery Cove Ultimate Swim ticket costs from £289 per person.

This includes a day at Discovery Cove (with all meals, snacks, drinks and a 30-minute dolphin swim experience), 14 days’ unlimited entry to SeaWorld, Busch Gardens and Aquatica, free parking and a free shuttle to Busch Gardens.
ocean-florida.co.uk/agents 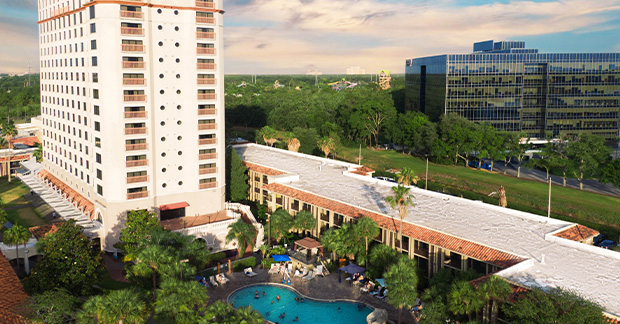 Walt Disney World Florida: First Look at the new Guardians Of The Galaxy rollercoaster
Things to do in Orlando with kids in 2022
The best theme parks in Europe for families with young kids, tweens and teens